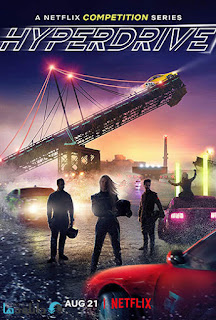 Executive producer Charlize Theron describes "Hyperdrive" as "`American Ninja Warrior' meets `Fast & Furious."' That's her pitch for the Netflix original series that puts elite street racers into supercharged custom cars that allow them to test their limits. The drivers take their cars to one of the biggest automotive obstacle courses ever built, which they try to defeat. Viewers will be on the edge of their seats as they watch the racers try to complete the perilous stunts, but the competitors' backstories will cause you to "bawl your eyes out," according to Theron.